Blog Tour: Shadows of Our Past by Tanya Jean Russell 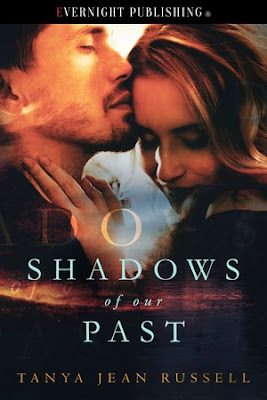 Jackson Halland has spent ten years running from a mistake that cost him everything, including Amory Parker, the woman he loved. With his gut-wrenching response to her reappearance, he realizes that if she will forgive him, then maybe, just maybe, he can forgive himself.


After ten years of working undercover Amory agrees to one final mission. Vowing to get justice for the woman she promised, and failed, to protect, nothing will stand in her way, not the prolific criminal she’s determined to bring down and certainly not coming face to face with the man she fell in love with on her very first undercover assignment, even if he has no idea who she really is, or the part she played in his past.

Amory was so engrossed in her thoughts she didn’t hear the approaching sound of bare feet, padding on the smooth wooden floor, until a deep groan broke through them and she looked up to see Jackson. His mussed, dark blond hair was shot through with strands of gold in the overhead lighting.The man was incredibly made. His arms stretching up and behind his head caused the bottom of his t-shirt to lift a few teasing inches, revealing a tantalizing glimpse of a tanned, rock-hard stomach. They weren’t the sculpted lines that came from the gym, but powerful, solid muscles. A fine trail of hair led the way to the top of his loose navy shorts. As he reached the bottom of the stairs, her gaze was transfixed.His legs were long and thick, every muscle rippling as he moved down the stairs into the hallway. A rush of heat shot through her body, setting every nerve alight. Her stomach rolled as she absorbed the sight while a little lower everything tightened and tingled. She’d hoped that her memory had been flawed, tinted by the rose-colored lenses of what she had long since accepted was her first love. That clearly wasn’t the case. Rather than letting himself go he had become more impressive. The slenderness of youth had filled out, living up to the promise of overwhelming masculinity.His lean muscles had broadened, and whilst the softness of youth had faded from his features, it had left a strong profile in its wake. Jackson had grown up all man. She gulped, heat flooding her.The good feeling from her run was replaced by a more base desire to touch every inch of his perfect body. To pull it hard against her own and feel those muscular planes mold against her. She unconsciously licked her lips as she watched him.As she met his eyes, the feeling of heat evaporated, replaced by a harsh chill of dread that sank through to her toes. His emotions were playing across his face and it was clear that, despite her DCI’s reassurances, Jackson had joined the dots and figured out who she was. The recognition clearly shocked him as his whole body jolted abruptly to a stop.Unable to move, she stared helplessly as he began to walk toward her, his face a mix of unreadable emotions. As he reached out, her body began to respond to the heat that rolled off of him. The scent of his skin washed over her, but she moved back defensively. It was a tactical mistake, giving away that she knew who he was, that she had known all along.“Amory?” he whispered, hope shining oddly through that one word.Almost imperceptibly shaking her head, all her professionalism flew out the window, and with her heart sinking she managed a stuttered whisper, “N-n-no… No, you’re wrong. I’m Olivia.”No amount of training was going to get her through this. Despite her only half-admitted hope that he’d see who she really was, Amory knew too much was at stake for this to happen, but it had. Now she had to endure the awful consequences of him recognizing her, the hatred that would follow this moment.

Please tell us a little about yourself.
I live in England and am married to an amazing Elvis & Neil Diamond tribute artist, thanks to whom I have a house full of jumpsuits & trophies. This, of course, is a source of much embarrassment to our two teenage children!
I am a little obsessive about books and have an embarrassingly huge and ever growing pile of things that I just 'have' to read next to my bed.
I squeeze my daydreaming ... ahem ... 'writing' around my family and my day job in HR, and am convinced that chocolate & diet coke should be considered a well-balanced diet!

What are your hobbies/interests?
Between writing, work and the family it’s hard to fit in much else but I have some amazing friends that I love hanging out with.

Books or movies – which do you prefer? Do you have a favorite?
I love both, I am a real bookworm and can’t get to sleep without reading at bedtime. I also really love movies and will go to the cinema to watch just about anything (except horror – I’m a real wimp!). That said, I often struggle with movie adaptations. I find myself spending the whole film exclaiming ‘that’s not how it is in the book’.

If you could meet one famous person, past or present, who would it be and why?
I’d really like to meet Janet Evanovich. She writes really fun books about a female bounty hunter and I’d love to spend time with her just soaking up how her brain works!

What is one thing most people don’t know about you?
I was in the Air Cadets growing up and got the first part of my glider pilot licence as well as being a Royal Air Force certified marksman. Both skills that have completely lapsed over the years!

What inspired you to write Shadows of Our Past?
I really wanted to write about women who were in the role that we’d normally see the male lead in. I love women who are capable of rescuing themselves, but are also brave enough to take a chance with their hearts, or in this case, a second chance. I am also really intrigued by the creative ideas that people who own country estates have to find the money to preserve the historic places. For me the book was the perfect opportunity to combine the two.

What is your favorite part of the writing/publishing process?
This is a hard one because I have times during every step of the writing and publishing process where I love it, and equally times where I hate it and am convinced it’s not going to work. The one part that is consistently fun is when I start revising the first draft. At this stage I really know my characters and I love being able to mold the shape of the story.

What is your least favorite part of the writing/publishing process?
Definitely writing the synopsis. Distilling hundreds of pages down into just two is more painful that I would have ever believed possible!

If you could thank one person who has inspired/helped you along this path, who would it be?
I don’t think I could narrow it down to one person. I’ve been lucky enough to have support from some amazing people from writing teachers to members of the Romantic Novelists’ Association and my local writers group the Belmont Belles, but in terms of setting me off on this path I guess it would be my parents. In their own ways they both encouraged a love of reading that made me aspire to write.

Any advice for aspiring authors?
Seek advice, have fun and keep at it. The writing community is amazingly supportive and encouraging, they will give you lots of amazing advice. Enjoy yourself, it can get tough and I don’t know a single writer who doesn’t go through regular stages of being convinced everything they write is trash; when that happens, keep going and let yourself have fun with what you’re writing. If you’re having fun it’ll show in your writing!

Make sure to follow the whole tour—the more posts you visit throughout, the more chances you’ll get to enter the giveaway. The tour dates are here: http://writermarketing.co.uk/prpromotion/blog-tours/currently-on-tour/tanya-jean-russell/
Use the Rafflecopter to enter for your chance to win an eBook copy of Tanya’s previous book, Broken Trust.
http://www.rafflecopter.com/rafl/display/8b9ec5be186/?