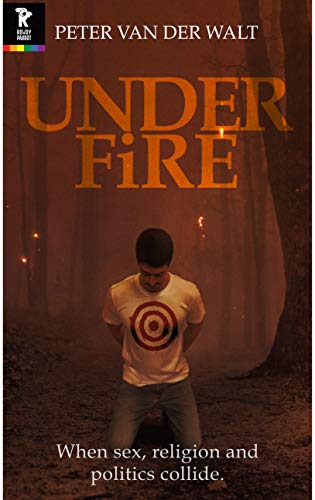 The quirky little city of Fairbridge is about to explode at the intersection of sex, religion and politics. Nestled in the Blue Ridge Mountains, Fairbridge is home to a sizeable LGBT community; as well as American Evangelical Christianity’s brightest rising star. The people have embraced the contrasts and paradoxes as part of life in the New South. Students, hillbillies, snake handling tent revivalists, a new police chief, a feminist lesbian bar owner, rich out-of-staters… they all call Fairbridge home. So far, the uneasy peace has held. Paul Draker – a gay, former Combat Rescue Officer – returns to the city to live out his days peacefully in the woods of Western North Carolina. But as the edges of the peace begin to unravel, and the culture wars reignite, he is on a collision course with a tortured soul on a perverse mission to kill as many LGBT people as possible.

So, this book. It's controversial, it's shocking, and it's thoroughly compelling from start to finish. Under Fire is written in a rapid-fire style that can and at times does come across as choppy, but it somehow works for this one. The story feels a little like reading a true crime book. In fact, the whole time I was reading, I could imagine reading about something like this happening or hearing about it on the news.
We learn about several characters throughout this book with Jimmy and Paul being most prominent, and Peter van der Walt does an excellent job of writing characters that feel real. Love them or hate them, these are people we could pass on the street, converse with in checkout lines, people we could know. We may not get everything about them, but how often do we get inside the heads of people we're acquaintances with in real life? People have their secrets, the things they don't want others to know, and we see that here with the people of this small town - the police chief stuck between a rock and a hard place, the bar owner determined to be who is, the church pastor spewing more hate than love.
And then there's Jimmy and Paul. Jimmy simultaneously repulsed me with his actions and broke my heart with everything he's endured, and Paul, who seems pretty straightforward has his own demons to deal with and may just be more than what we see.
I'm rather picky when it comes to thrillers, and in all honesty, I come away disappointed more often than not, but this debut by Peter van der Walt is everything a thriller should be and then some. I was hooked from the very first page and couldn't put it down, and after that conclusion, I'll be impatiently waiting for whatever comes next in this series.